So how rich was the Dutch East India Company?

If you’re wondering what paid for all those nice canals and houses in Amsterdam, Leiden and Utrecht. Well, this image might explain it all a bit.

Feel free to dive right into the things with us – it certainly wasn’t great for everyone!

The Dutch East-India Company – Apple Didn’t Have Nothing On It!

The “Vereenigde Oostindische Compagnie” (VOC), better known as the Dutch East-India company was set up in 1602, head-quartered in the “Oost-Indisch Huis” (East-India House) in downtown Amsterdam – which still stands today. It was founded as a private merchant company that was granted a two decade long monopoly by the government for spice trading in Asia, in particular the Dutch East-Indies, known today as the Republic of Indonesia.

And if you think Amazon is thrifty with deliveries – the VOC sent over one million voyagers across Asia, which is more than the rest of Europe combined, in a time where a trip from Amsterdam to Batavia (Djakarta) would last no shorter than 8 to 10 months and many ships, or individual passengers, would never return. Many of the massive sailing ships perished in storms, fell prey to piracy or infectious disease. Traveling at the time came at a huge risk, but once on location and with the right knowledge and attitude there was a great chance of becoming wealthy and so many took the risk.

The company was also the first official company to issue stocks, which peaked during the Dutch “Tulip Mania”, a craze for tulip bulbs that is seen as the world’s first true financial bubble. The VOC’s stocks pushed the company’s worth to a massive 78 million Dutch guilders, which is a pretty solid business even today, but translates to a whopping $7,9 trillion dollar worth today… Yes, really, trillion. That’s 7,900 billion – or 79,000 million!

The Dutch are doing pretty good in modern times as well, different reasons why of course – Check out our youtube channel for more videos like this:

Modern-day Companies Don’t Even Compare! (And That’s a Good Thing!)

At it’speak the VOC was worth the equivalent of Apple, Microsoft, Amazon, ExxonMobil, Berkshire Hathaway, Tencent, and Wells Fargo put together! This means that the world’s most valuable company, Apple, is worth about 11% of the peak value of the VOC. Eat that, Steve Jobs! 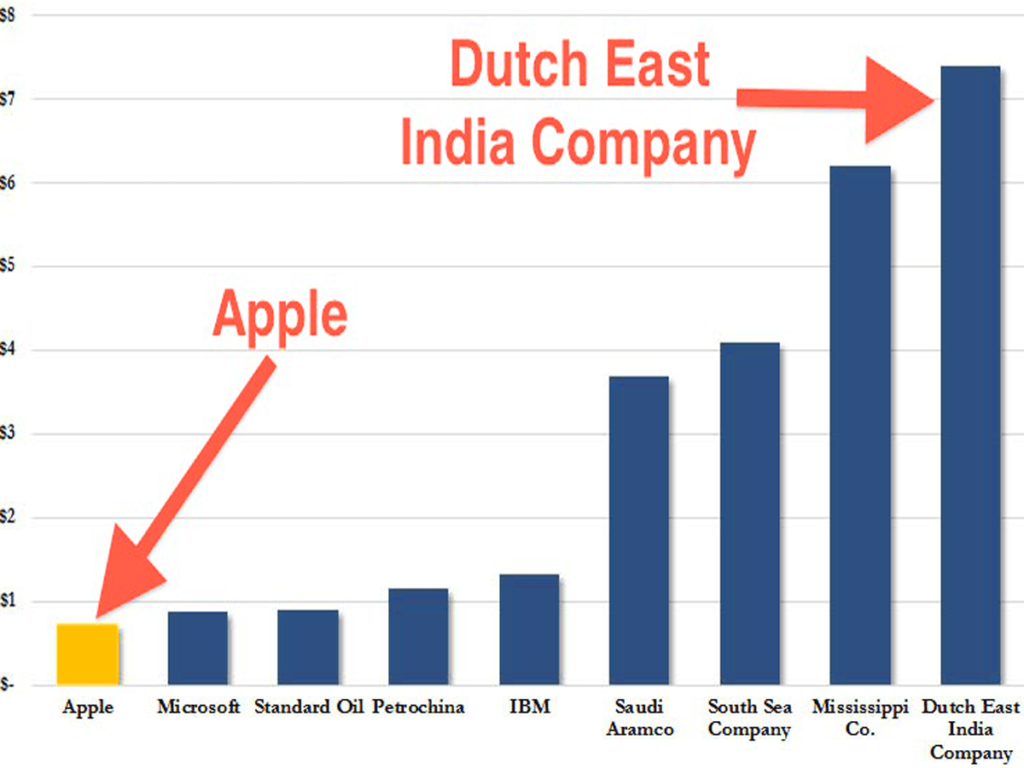 It was also worth, roughly, the same amount as the GDP’s of Japan and Germany of today added together. Can you dig it?

The company also employed 70,000(!) people across the globe, making it a textbook multinational by definition, and this was nearly four centuries ago!

Of course, it wasn’t all fun and games with the Dutch East India Company – despite bringing the Netherlands prosperity and successfully connecting the world it also brought horrendous suffering for an endless number of people. For two centuries long the VOC did whatever it had to make sure its assets were protected and profit was high.

That included slave trading, colonial oppression and absurd mistreatment of employees – if you think your job is tough today, try being a deckhand on a year and a half VOC-round trip or, even much worse, a slave living in semi-dark in the belly of the ship!

The VOC is thought to have transported, or rather ‘displaced’, as many as 50,000 people from Africa to serve or trade as slaves in its colonies. It’s a staggering number, worse however is that many countries subjected even more people to slavery per individual nation than the Dutch and VOC ever managed to, creating a permanent “involuntary” change in demographics around the globe. The success of international trading companies like the VOC has forever put a stain on Europe’s colonial past.

Regardless of its endless exploitation these trading companies, and colonies, have shaped the world and are at the foot of today’s ‘multiculturalism’ and the modern-day economy. Still many people are in denial about their country’s colonial past, Holland for one definitely gained its historic wealth and fortune over the heads of others, which is not to say that it’s the fault of the modern Dutchman – it’s hard to blame someone for something they never had a hand in. But denial or downplaying is flat out ignorant and inexcusable.

But it’s always wise to speak with some discretion to people of color, even in ‘multi-culti’ Holland, as the Indo- and Moluccan people are direct descendants of the VOC-days and black Surinam and Antillean-people are African slave descendants, their Hindu-counterparts having been ‘contract laborers’ from the Indian-subcontinent which was hardly better than being a slave.

Still, we hope you enjoyed this piece about the Dutch East India Company – and maybe sparked some curiosity about the Dutch trading spirit and their adventurous outset on becoming a world leader, but it would be irresponsible for us not to have mentioned the downsides that came with it. That much in the least is what every Dutchman owes the world, especially given that people of a colonial past are of such vital importance to modern Holland as we know it today.